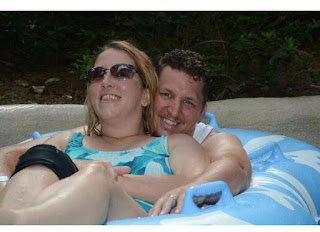 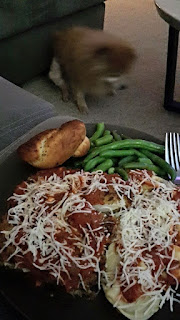 ... come home from working 8 hours a day, buy food at the store, and make an amazing Italian dinner from scratch! (I did buy a bottle of wine for me though....)
Posted by Blondefabulous at 6:16 PM No comments:

So, today is our actual anniversary. 11 years ago today I said I Do, even though we had already been together 5 years before that. Even though we already celebrated last weekend, and we were both at work I wanted to mark the day with a little bit of something.... So 2 days ago, I came up with this...... 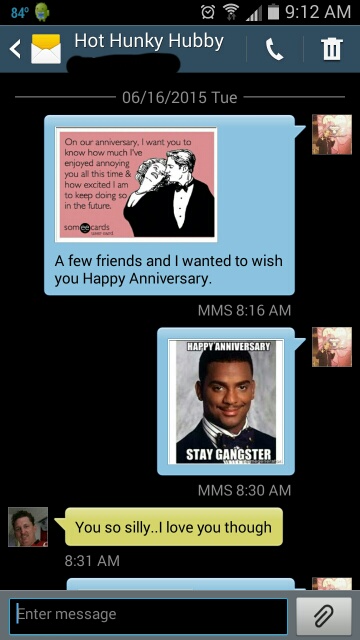 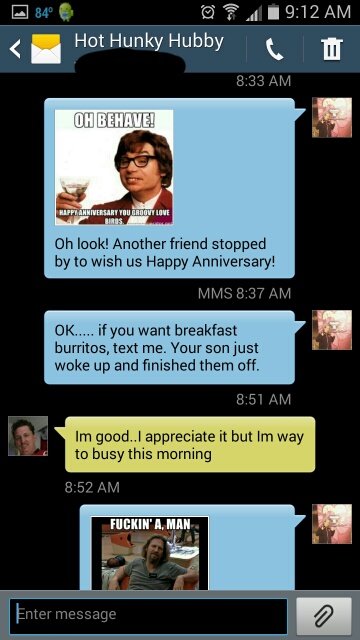 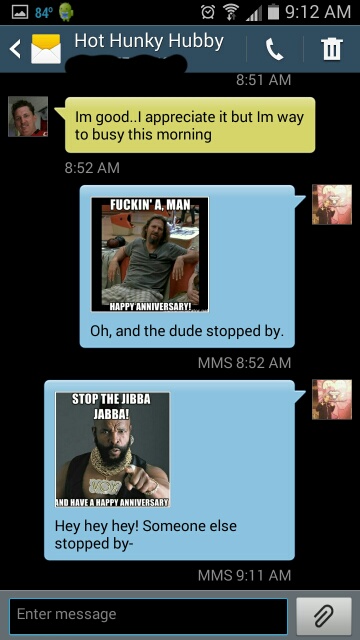 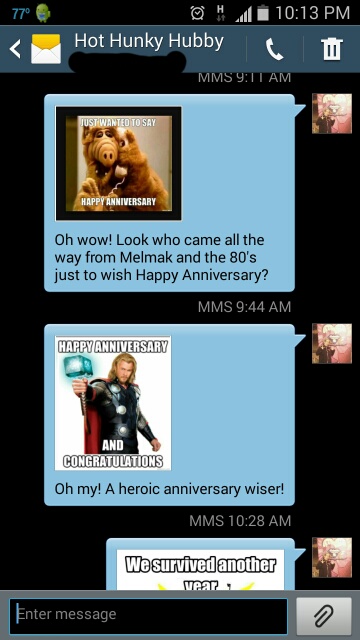 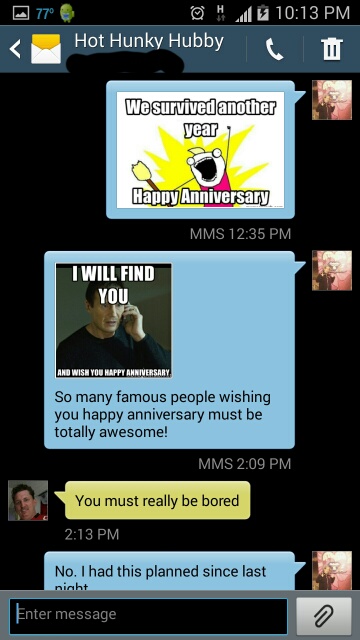 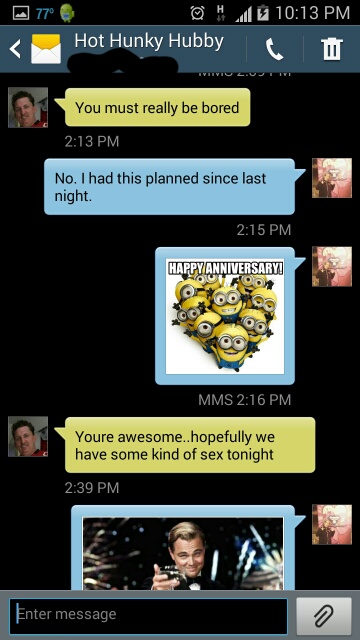 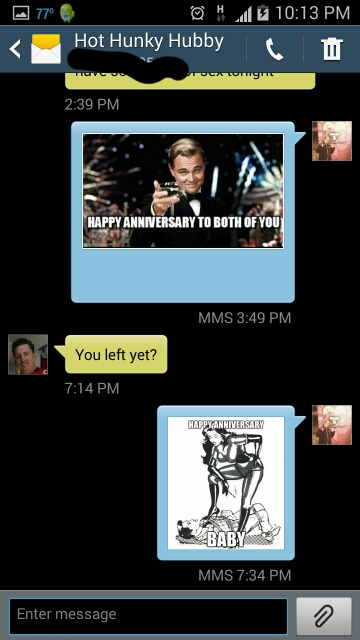 A pretty good idea, if I do say so myself! Happy 11 baby! I love you!
Posted by Blondefabulous at 10:35 PM No comments:

It's no secret 11 figures heavily into our family. HHH wore it when he played football. I wore it for roller derby. Mo wore 5.5 (eleven divided by 2) when she played derby. It has always hung around, so it's no surprise that our 11th wedding anniversary would be important. 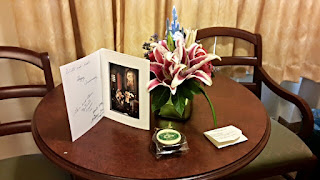 HHH had this little surprise waiting for me when we got to the room in Port Orleans: French Quarter. Beautiful flowers, a box of chocolates that was made of  chocolate, and a photo from Mickey and Minnie. It smelled heavenly! 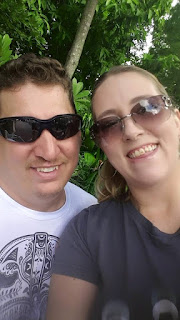 On Saturday, we hit up Animal kingdom. The Dinosaur ride almost re-broke my foot THROUGH the boot I was wearing! Seems Disney really souped up that ride! 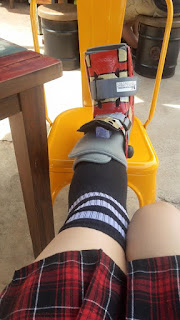 After that ride, we decided to put off Kali River Rapids so my boot wouldn't get wet. I had gotten Tramadol from my ortho on Friday, so after one of those and a glass of sangria, I was a-ok! We hit up our other fast pass of the Safari ride and went back to the hotel to shower. (It is 90+ degrees in Florida this time of year!) 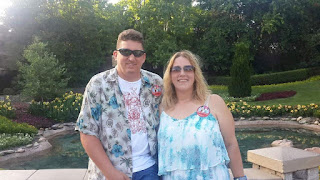 We then hit up Epcot because we had reservations for dinner at Le Cellier in the Canada pavilion. It was an amazing meal, as always with the only detractor being we had a poor waiter serving us. He couldn't remember squat of our order, wine selection,.... nothing.

So after all that, we spent some time at the Magic Kingdom on Sunday. It was off to Downtown Disney after that and then back home. All in all, a great weekend!

Tater Tots!
Posted by Blondefabulous at 1:48 PM No comments:

My bosses are back from their week long jaunt to Hawaii. It's good that they are back because the animals were getting out of hand. Almost every single one of the animals are rescued, so they have baggage. Sometimes that baggage includes anxiety about being left alone for good. Mystery was returned twice from the shelter that adopted her out. To this day, if we have to put her in the cat carrier to go to the vet, she becomes so scared she'll be "returned" she pees and poops herself before we even get out the door! Sport will start to freak out if his schedule is even marginally disrupted. He had his bath on Friday instead of Tuesday last week, and he was a nervous wreck all week.

Long story short, 5 minutes before Boss Lady was going to walk in the door.....

MADISON PEED ON THE MASTER BED!!!

Yes, Marshmallow Fluff peed on the bed. She has been angry all week. I had to bust my ass to get the bed stripped, pee cleaned up, bed remade, and then rush out to help Boss Lady unload her 25 bags from the car service. On my broken foot. While tripping on my boot! Add coworker #2 freaking out and I was done with this day at 10am.

Only bright spot was when I picked up Bluebell and Sport from their grooming. 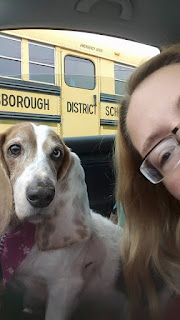 Bluebell took a selfie with me at a stoplight.

Well, tomorrow is another day.... hopefully a better day!
Posted by Blondefabulous at 8:15 PM No comments:

Paint almost done. Need to print a Stark Industries logo to cover the ortho thing, and then paint the straps. It's a bum job at best, but hey.... I like it! 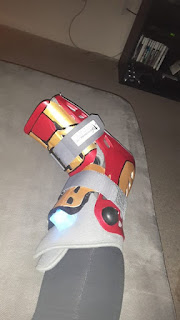 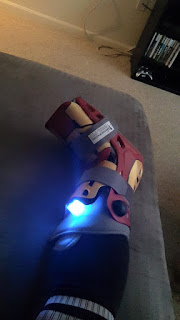 Posted by Blondefabulous at 10:37 AM No comments: