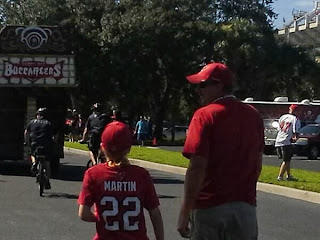 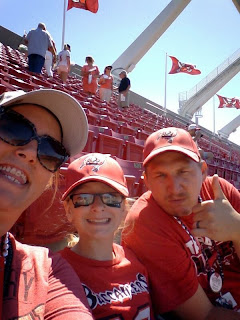 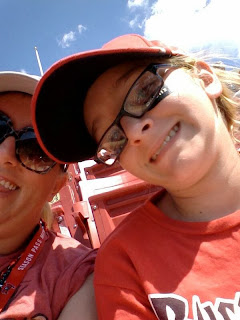 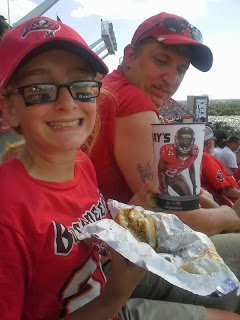 At least we had a great time!
Posted by Blondefabulous at 5:41 PM No comments: 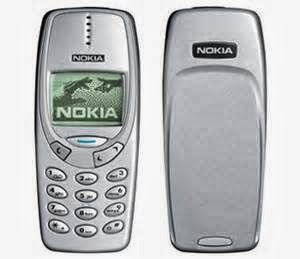 My husband. Protector, provider, love of my life.....

Yes. I said cell phone killer. My HHH is the bane of cellular phones. He has run them over. He has mowed them down with a pro lawn mower. He has dumped them into pools twice. Now, we have the most recent murder.... he dropped his WORK cell into his cup of Mountain Dew.

So now, since I have a work cell phone issued to me as well, I have given HHH my personal S3 to use in place of his work phone. He just switched the SIM card into it. He will buy a used cell off eBay or Amazon to replace the wok phone eventually.

THE NEXT PHONE I BUY HIM WILL BE A FRICKIN NOKIA BRICK PHONE!
Posted by Blondefabulous at 5:04 PM No comments:

No not the Beatles song, my kids dealing with that every sly & elusive emotion. So far this week, Eldest broke up with her boy friend. Apparently she decided there really wasn't anything there to keep it a relationship. (He's also a sophomore and her being a junior kept them from really seeing each other during the day.) Then, while we were playing Mario Kart, a girl from the middle school knocked on the door and asked to speak with my son.

SO, this girl is apparently in 2 of Junior's classes at the middle school. She walked Junior home on Tuesday, even though it is 3/4 of a mile past her own house. (her parents grounded her for doing that.) Now she was at the door and asking for Junior to come to her little brother's birthday party. Her little brother is turning 10 and Junior has no idea who this kid is. Oh, and the party is in a half hour! Nope. Have diabetes. Can't do last minute invites. Then when HHH and I went to the store, the girl calls two times looking for Junior!

Someone has a MAJOR crush on Junior.

When we got back from the store, I had Junior call her back, explaining why he couldn't come to the party. When he declined the invite, the girl must have gotten upset because we heard him tell her "No, I don't hate you." (Guilting starts early I guess.) Then he invited her to come hang out with him here at our home to play video games on Sunday. He was being so sweet and trying not to hurt this girl's feelings.

So, one child ended a relationship and another may be starting one. Probably not though because Junior said he just wants to be friends. Yup, my boy "friend zoned" someone. He learns quickly. Mo says "Dude, she's gonna kidnap you and chain you up in the attic!"

Lord, I hope not!
Posted by Blondefabulous at 9:21 PM No comments:

It rained again. This time we had 2 ponchos so we stayed dry. There was an almost one hour delay due to rain & lightnng. HHH and I just poncho-ed up and stuck it out in our seats. 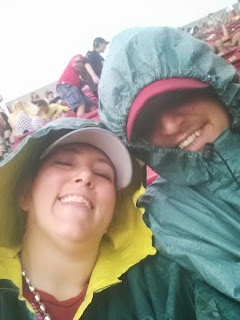 Eventually the rain ended enough for me to get a weird shot of the sunset behind the stadium. 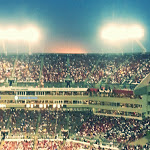 The Bucs were the same old same old. Do just enough to keep the fans on the edge of their seats, then blow it at the end. The fans in the stands were the real show. We saw....

Holy balls! Talk about a weird opener. I hope the next few games will be a better mix of folks. There is no reason to be rude. I respect your team, please respect mine, you know?

Now the Buc's are 0-2. Those season passes are really paying off. (NOT) But HHH and I still had a great time!

Heck, it's almost impossible for us NOT to have a good time at a football game. #itsabucslife

Posted by Blondefabulous at 11:14 PM No comments:

What ever. I don't believe that mess. Dudes in hockey masks with machetes. Hokum, I say! 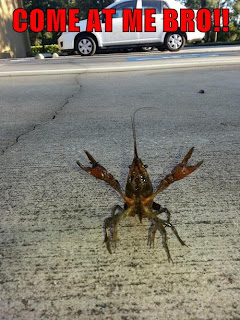 This guy materialized out of NOWHERE! One minute the parking lot at work was empty, next minute we have a crawdad trying to throw down! What the hell?!? Then we turn our back and he was G-O-N-E!

Touche' Friday the 13th. You now have my reserved respect.
Posted by Blondefabulous at 9:08 PM No comments: 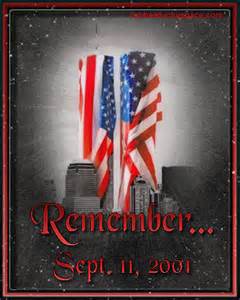 May we NEVER forget.

Posted by Blondefabulous at 11:59 PM No comments: